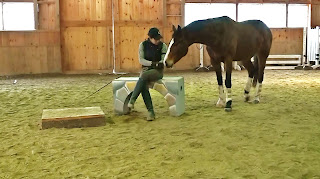 As I have come to work with some challenging horses and with the wisdom of time and experience, I have come shape my training around Positive Reinforcement.

What is Positive Reinforcement? It can be Verbal, Physical, Food, or allowing the horse to do something he wants to do. If I have a horse that may have some undersireable behavior I basically ignore it and focus on the rewarding the behavior I do like and build up from there. We tend to fixate on the “Bad” behavior and correcting it instead of teaching the horse a new pattern.

For example, if a horse is rude around food I would not correct him or yell at him for being pushy and aggressive. I would think of what I might like the horse to do instead and set about showing him how to do that and then rewarding the positive change. So I might say to the horse with my body language or even a stick, “could you move back over there about 5-6 steps and “whoa”? The horse may need to be requested several times to stay back and wait, but I will just keep asking politely until he says “ok” by standing and giving me eye contact. At that point I will give him the precious food he so much wanted and we will have had a conversation about how I’d like him to conduct himself around me and food. Ultimately respect my leadership and safety and I will be more then happy to give him what he wants. Leadership is  balance thing.

If we are Ogres and control freaks all the time, the horse will run the other way when we come to the pasture. On the other hand if we are push overs, we can get hurt and frustrated because our horse out ranks us.
We need to focus on consistent positive, behavior patterns and keep working with them daily.

When I have worked with difficult horses, I find as long as I can get them to honor my personal space, we can start to have a conversation about what might be a better way to work together. I don’t really care if a horse is a bucker, rearer,striker or kicker. None of these things can hurt me if the horse is not in my personal space. So if I have this horse and he is upset or even aggressive, we have to learn how to be in a space and respect each other. If I feel safe I can let the horse express his opinions freely until he feels heard and then he will probably listen to me. A lot of times a horse wants us to just listen. Like a person who’s upset.This horse often stops protesting when he sees I am not going to make a request until he shows me his softer side. Also, by not trying to control the “bad” behavior it often diffuses itself and fizzles out. If you don’t feed that energy, it goes hungry.  Same with fear and spookiness.

Some horses seek negative reinforcement just as much as positive because they are smart and it has gotten a rise out of the human. It can become a game that you don’t even know you are playing. If I ignore this game and then see some behavior I like, I will go and Positively Reinforce it. The horse learns the “negative” behavior goes un-noticed and loses interest in doing it anymore. I have found this way of training has garnered me much more success then chasing horses around pens and “Dominating” them. This is not to say a horse doesn’t need leadership and to respect you. It is to say that we can do it in a Positive way and keep a nice relaxed, harmonious connection even when there is a lot of energy to deal with.
FDT