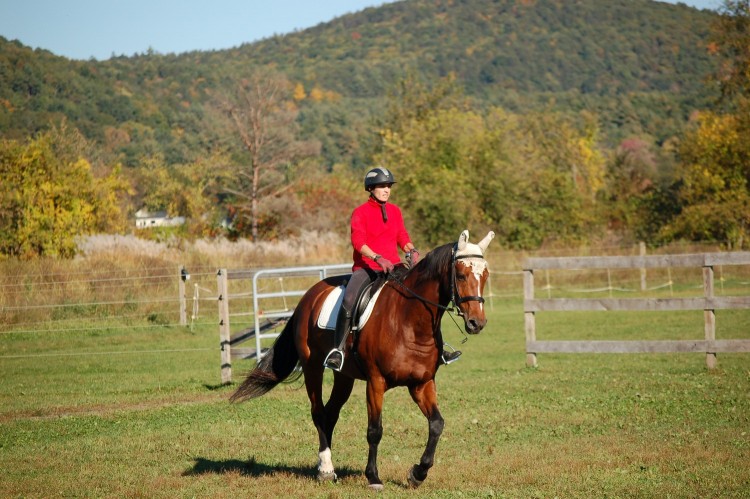 “Once that horse figures it out, she’s going to be fantastic.” “Get rid of her and get what you really want.”

“If you get rid of that horse, you’ll be making the biggest mistake of your life”

Baby Cranky Pants was no longer a baby, but she was still cranky. The opening quotes from friends and family (my husband was Brio’s sole ally) echo the internal conflict that had come to define my relationship with this horse.

Depending on the behavior du jour, I wavered between replacing her with a placid, well-mannered mount and soldiering on with her, building on the progress we’d made together with clicker training. My commitment to this horse — initially to the yet-to-be purchased Dream Horse, then to the post-Cranky Pants mare I prayed she would morph into – could no longer be sustained by an ideal. Undermined by a reality that was its total opposite, my commitment to Brio now took root in the challenge of solving the mystery of how to partner with this horse.

Looking to nature and nurture for clues, I made a more thorough investigation into the behavior and temperament not only of her mare and sire, but of her entire family tree. Candid conversations with the breeding farm and research into reports of stallion tests unearthed not even a demerit for less-than-perfect comportment. Communication with a New Zealand breeder featuring the same mare line crossed with the same stallion line as Brio’s was very informative. Shocked by Brio’s antics, he affirmed he’d never experienced any aggressive behavior from that cross, and especially praised the mare line’s “super work ethic” and “super jump.”

My inquiry into Brio’s nurture returned me to the sales video in which she made a cameo appearance, frantically running to avoid crossing paths with the larger, dominant black mare about whom I had initially inquired. A second clue emerged in my recollection of a comment made about Brio’s other 2-year old pasture mate, another filly with the dressage potential I was seeking. When I told the breeder I was disappointed that this filly had already been sold, she replied “You wouldn’t want that horse. She’s a brat; a good brat, but a brat. Brio is the filly for a first-time baby-owner. ” When it later became apparent that Brio was not what we thought she was, I located the trainer who had purchased that filly. In desperation I emailed her, introducing myself, my conundrum and inquiring about the horse’s temperament, especially in turnout. She confirmed that the horse was extremely overbearing and difficult.

Part of the mystery had been uncovered: Brio had been at the bottom of the pecking order, turned out with two extremely dominant mares. Accustomed to adversarial relationships, she had pinned her ears at Santana on that first stroll down the barn aisle out of habit, perhaps. I suspect she did not retaliate that morning when Santana attacked her from the other side of her paddock fence because she did not realize how easily she could have bested the smaller, older mare. Once they were finally turned out together and Brio realized she had the upper hand, she displayed the behavior described by the Brazilian educator Paolo Freire: given the opportunity, the oppressed becomes the oppressor. Successful at dominating her new pasture mates, Brio turned her newfound alpha powers against me as well. Although Santana had also been an alpha mare who was not above chasing pasture mates away from the water, trying to cow kick while her teats were being cleaned, or trying to nip while I was adjusting blanket straps, she never kicked or bit me because a stern word terminated the onset of a raised leg or a bared tooth. Although I was pleased with the results of my clicker training with Brio, in retrospect I realize I lacked the correct tools to handle this Brio’s behavior around hay in turnout strengthened my conviction that she
was finally in a position to turn the tables, even if in a different field and with different herd mates, or the two fillies who had oppressed her. I don’t know the particulars of the turnout feed arrangement at the breeding farm, but I suspected from the way Brio behaved that she had had to scrap for food. The first day I put out hay, I set out 5 or 6 piles, and watched in amazement as Brio frantically scurried from one pile to the next, pushing Santana and Cocoa away but not stopping to eat at any one pile. Instead, she grabbed a quick mouthful, then scurried to another and another to repeat the proprietary process. Raising her head from each pile and rocking her weight back onto her rotund hind end made rounder by the bulge of a winter blanket, she looked like a proper Victorian lady gathering up her bustle and skirts in preparation for a more energetic jaunt down the sidewalk. Aside from this amusing detail, it was sad to witness the very real desperation in this horse’s demeanor. It was clear that access to one hay pile whenever she wanted, for however long she wanted (neither Santana nor Cocoa would challenge her), was insufficient to quell her anxiety. In an effort to put her at ease, I tried to imagine what she would like to see when she left the security of her stall’s feed bucket and hay pile that she never had to defend or share. The image that came to me was multiple unclaimed piles that were hers. The solution: fifteen flakes scattered far and wide so only two would be occupied at any one time by her competitors and the remaining vast array of hay was hers for the taking.

Fast-forward to this morning’s turnout scene. After Santana and Cocoa have left their stalls for the paddock, I open Brio’s door, draw her forward with eye contact and my finger, and remind her she can’t dawdle because she has the job of bringing out hay for everyone. She leaves her stall at liberty and stands on one cross tie in the aisle where I change her blankets. I then seize a muck bucket overflowing with flake stacked upon flake and enter her stall, looking back to remind her to follow me instead of sneaking down the aisle to gobble up any breakfast morsels left behind by Santana. Before unlatching the stall door that opens directly onto the paddock, I gently remind her that she must WAIT while I go first. I open the door onto the frigid snowfall and pause, then look back at my companion, gently reminding her to WALK. Together we emerge single-file. I lay down only half a dozen flakes, not fifteen (more will be coming for lunch) in the small area cleared of snow. Each of my Girls buries their nose in a flake and predictably, Musical Piles begins, but absent the anxiety, the freneticism, just the peacefulness of falling snow.”

Notice in this installment how the food exercises came into play and yielded information and opportunities to shift patterns in the relationship of these two. More to come….