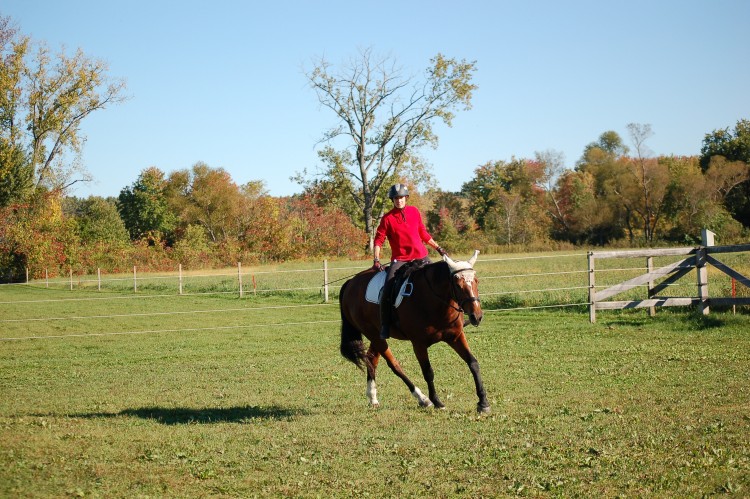 Here is a new Chapter from Brio’s owner. When I met this horse, she was good with me at first and then finally started to reveal the patterns her owner had been describing. I witnessed some of the most “Confrontational” behavior I’d seen in this horse. People ask me how do I know if a horse can be rehabbed like this one. She was acting very dangerous and aggressive. She showed extreme dominance. We were able to deduce by careful observation that it did coincide with heat cycles so was somewhat hormonally driven. She was give herbs and holistic treatments to help calm her cycles. The rest was up to me and her owner to shift this difficult pattern.  I took her over from her owner to work with to feel out if she was going to be able to be rehabilitated. She was mostly willing to comply with my requests. A few times she challenged me and I made it clear to her that I was not in agreement with this behavior and I was not going to allow it. She seemed to accept this from me. When I work with a new horse. I have an immense advantage of having no patterns established with the horse. I have a “clean slate”. That is how I knew Brio had a chance. She was willing to converse with me about changing her dangerous behavior. The bigger challenge was her person being able to shift a long standing pattern of respect issues that were downright dangerous. Simply put, Brio had learned to really control all the interactions she had with her person by bullying her aggressively and scaring her for several years. I give her person a lot of credit as this mare is not for the faint of heart. But I was able to get through to her and that gave me hope for her owner if I gave her the tools. Brio’s owner writes:

“It is serendipitous that at this point in time I continue my blog recounting Farah’s work with me and Brio because it was exactly a year ago this month that she began to help us. I anxiously awaited the results of her initial evaluation of Brio, worrying/wondering if she would tell me we should part ways. True to form, Brio showed none of her dark side to this new person who in her mind “came to admire her,” which is Brio’s perception of all newcomers. Farah said something to the effect of not seeing any red flags, and I felt like the parent whose child’s symptoms mysteriously disappear in the doctor’s office. During the evaluation, Farah was quick to discern that Brio was either reluctant to move or a frenetic powerhouse of unbridled (pun intended) energy,

corroborating my experience that she was either unwilling to trot or on the edge of a bucking fit. I watched mesmerized as Farah stood near her hip and got her attention, then stepped toward her to move her over. I had never stood in proximity to Brio without a lead line, and I was intrigued by this introduction to liberty work. I had never been taught this technique of getting a horse’s attention, and I started using it daily as I approached her to bring her in from

turnout, and immediately felt it improved our communication. It was a very long time before I had the confidence to leg yield myself toward her hip, but I reached this goal last month and captured it on a video I sent to Farah. Likewise, I found the confidence to graduate from directing her movement from a safe distance behind her or at an angle to companion walking and influencing her pace and body position via my own. I will never forget how connected I felt to Brio as we walked in side-by-side from the distant field after liberty work. Subsequent lessons taught me how to establish and maintain boundaries as I learned to guard the space near the barn and the food I brought out with us. I realized I could be a Lead mare and move Brio off a hay pile, something I had never attempted. Last month as I was placing Briomf’s hay in the corner of her stall, she nipped me. I immediately stood up, squared my shoulders, “cleared the space” and moved her off the hay pile, insisting she remain in front of me until her facial expression was respectful.

Brio revealed a shade of her dark side when she “threw heels,” as Farah calls it, during this session. I watched Farah’s split-second response of beating the ground with the whip in response to the flying hooves, like an ancient warrior drumming the earth against evil. Brio was not allowed to join our company until she was respectful of our space and safety. This gesture has been a mainstay in my arsenal of tools. Just a couple of days ago when Brio threw heels at me in protest against my request that she come in for dinner, it reminded her that she could respectfully say “No” to my request. In anticipation of moving Brio under saddle, I learned how to move her at liberty with increasingly subtle gestures: a raised whip became a raised hand or a simple step toward her; an outstretched arm became a pointed finger to signal direction. I learned how to “get her eye” and be her center as she trotted and cantered circles around me. This became our daily pre-ride ritual. Farah told me that without this ritual, I was riding a time bomb ready to explode. I felt so relieved that she understood my reticence to ride through Brio’s temper tantrums. If Brio’s demeanor at mounting was not focused, cooperative and respectful, we would engage in more liberty work until she was a willing partner. It was this tool that enabled me to peel away the layers of inattentiveness, frenetic energy and aggression, ultimately revealing a horse I could ride alone with no one on the property, without reins or stirrups, in the dark, in the big field, in 40 mile an hour winds. Farah taught Brio to respect and respond to the whip, and I began the daily practice of having her trot in proximity to me on the end of a line while I tapped on her side in anticipation of the leg that would be against her urging her to trot. The first time I asked her to change direction by drawing her toward me as I held my ground, she responded with aggression, but within a week or so this bad behavior disappeared and I was thrilled. Within three months after Farah’s initial visit, I was reaping the benefits of a clearer, healthier way of communicating with my horse. However, as luck would have it, Brio’s darkest side reared its ugly head – quite literally — during the last lesson we had before her departure to “Down Unda.””