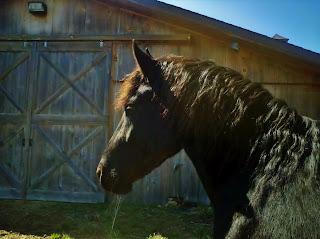 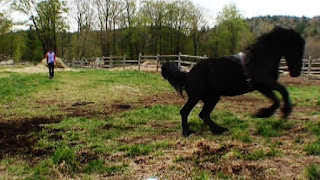 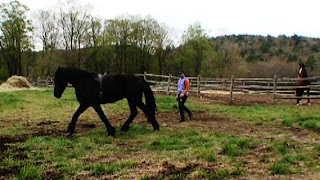 I thought I would talk a bit about how my approach to Django unfolded as he showed me what would work best for him. For those of you who don’t know, I have been keeping a Vlog of his training from Liberty-Line-Mounted in my Classroom.  Django is a 3 year old Friesian that was sent to me for starting under saddle. I did not know anything about him except what his owner described and what I observed from the time he arrived. I of course, started with Carolyn Resnick’s Waterhole Rituals which allowed him to shape his training program.
I observed in the first few exercises that he was friendly, playful, dominant, smart, and very food oriented. He also loved to be groomed.
After spending some time Sharing Territory and Saying hello, I opted to work with food exercises with him in his paddock for almost a month. He loves food but was not respectful around it. It became a very powerful approach to his focus and progression to all other areas.
The first food exercise I used is inspired by Carolyn Resnick’s Intimacy exercise. Mind you I did not attempt to do any of this until I knew I could reliably move Django slowly and quickly out of my space without food. This is a very important safety precaution.
I sat on a chair with a pan of food at my feet first asking Django if he could wait to put his nose in to eat. I could see he understood after a time when he stopped trying to go past my hand which was blocking his nose from the bucket. When he showed that pause and focus, I invited him to eat out of the pan. I allowed him to eat and then asked him to wait several times so he got the idea about being close to me with food around. This was a particularly important lesson for him because he was rude and pushy around feeding time. I knew though, that he did this because no one had explained to him that this might be seen as rude.
The next food exercise I did was Claiming Territory around the food. I showed Django that sometimes he would have to leave where the food was and could not come back to the pan of food until he halted from my body language. Then when he looked at me and halted instead of trying and push past or go around me to get the food, I would get him a handful and feed it to him. This help him learn to focus on me and that the food would come through me sharing it with him. He would not be allowed to help himself until then. This made him want to focus on my requests more. This is very different then using treat rewards at certain times. It is the way horses handle each other around food and leadership.
Once these exercises were firmly established, I was able to start asking him to yield his body around the food (ie. circle and move sideways prep for natural and liberty lunging). I was also able to ask him to leave the food and eventually walk away with me all over the paddock. The food no longer became a source of focus at all except to occasionally walk back for a reward for good work.
This work carried into being lead and working around grass and the ability to have the treats in the arena where we have graduated to for our Liberty to Line phase. I’ll talk more about how all this helped him with him understand how to be “Lead” or have manners on the lead and stop dragging and barging into people without ever putting him on the lead in the next post. If you’d like to follow his progress, you can subscribe to my classroom here http://www.fdhorsemanship.com/#!classroom